How quotes data for Portfolio Slicer is stored locally

Note - this page describes the behavior of the PowerShell scripts that were created by Maxim specifically for Portfolio Slicer. We adding documentation about Maxim's script behavior after realizing that they are used by the majority of Portfolio Slicer users.

When you execute the script to extract quote data from different sources, that quote data is downloaded from some internet source and it is stored on your computer in the folder "<DataRootFolder>\Quotes". You can change <DataRootFolder> value in psConfig.txt file. By default, this parameter value is not specified and that implies that data root folder is "..\" - that is value relative to your script folder location.

Example 1: Your Portfolio Slicer scripts are located in the folder "c:\PortfolioSlicer\Scripts" and in psConfig.txt you have not specified "DataRootFolder" (value is empty).


In such configuration, your quotes will be stored in the folder "c:\PortfolioSlicer\Quotes".

Example 2: Your Portfolio Slicer scripts are located in the folder "c:\PortfolioSlicer\Scripts" and in psConfig.txt you have specified "DataRootFolder" value as "c:\OneDrive\PortfolioSlicer\".


In such configuration, your quotes will be stored in the folder "c:\OneDrive\PortfolioSlicer\Quotes".

In the quotes folder we will have 2 files per symbol with quotes data:

Note - If you choose not to create archive quotes (psConfig.txt parameter “ArchiveQuotes” value set to “No”), then the second file (*_Archive.txt) will not be created.

Here is example of the file list in the Quotes folder

Normally scripts extracts and stores on your computer daily quotes. But Portfolio Slicer reports are designed so that they need daily quote data just for last 50 calendar days (about 32 trading days) and all quotes older than that can be monthly (that is one daily quote every 30 days). That is why there is a script that reviews file “_Symbol_.txt” and for older months leaves just one quote record per month and other quotes move into the file “_Symbol__Archive.txt”.

In psConfig.txt there are 2 parameters that control quote archiving

There is just one reason why we recommend that you keep default parameter values and do quote archiving - better performance in Portfolio Slicer. With fewer quotes to load Portfolio Slicer will work slightly faster and will use less RAM (Memory).

Symbol quote file contains multiple lines where each line represents symbol closing price for the specified date. Each line in this file has 3 values separated by a comma:

Here is an example of quote file records:

You will notice that for the last 50 calendar days (about 32 records) there are quotes for each business day and before that, there is just one quote record per month.

Any file that has extension .txt and is in Quotes folder OR ANY SUB-FOLDERS will be included into the final PSData\Quotes.csv file! So you can have as many sub-folders and as many quote files inside of the Quotes folder and they all will be used! There is an exception to this rule - if the file name ends with _Archive.txt, then it is assumed that this is archive file and it will not be included into a final PSData\Quotes.csv file, unless you set parameter “IncludeQuoteArchiveFolder” in psConfig.txt to “Yes”. So any file that is inside of Quotes folder OR ANY SUB-FOLDERS must have the same format as it was described above. Keep in mind that archiving script will split each quote file into 2 files inside of any Quotes subfolders too.

At the same level where you have “Quotes” folder, there also will be “QuotesIntraDay” folder. This folder will have intraday quotes from different sources. 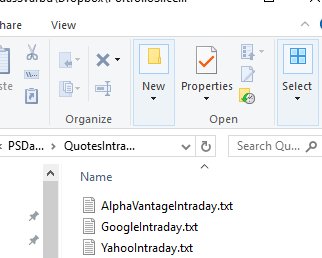 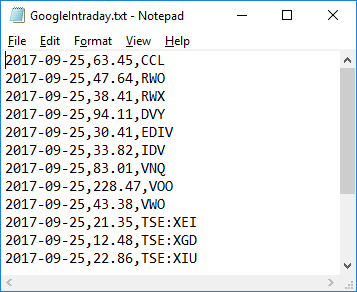 These quotes are not placed into Quotes folder as they are not closing quote values and most likely they will change over the day, so they are deleted before every new quote request. If you have any unexplained issues, you can always delete all .txt files from this “\QuotesIntraDay” folder and re-run quote extract.

How to specify symbol information for quote extraction

In the psConfig.txt file, there are multiple sections (Yahoo, Google, GoogleWeb, Stooq, AlphaVantage) where you can specify symbols that you want to get quotes for using related scripts. For each symbol, you can also optionally specify a list of parameters that will affect how quotes will be extracted and then presented to Portfolio Slicer.
Here is an order of parameters that can be used when specifying Symbol:

These parameters are: Here are examples on how symbols can be specified:

How quotes are updated

After getting “day closing quotes”, usually we will run a related script to get intraday quotes. For example, after running script “GetQuotes-Yahoo.ps1” we will also run “GetQuotes-YahooIntraday.ps1”. This way if for example, Yahoo provides closing quotes for that day just at around 8 pm EST, we can get an intraday quote that is usually delayed just by 20min. As explained above, intraday quotes are stored in the separate file, so they are deleted before each quote request.

If you want to get more details on what happened during script execution, you should check log files in the folder “\Scripts\Log”. For every .ps1 script there will be same name log file with extension .txt. For example, for script GetQuotes-Yahoo.ps1 there will be log file GetQuotes-Yahoo.txt with detail log information. Usually, this log file will contain URL that was sent to the source server to get quotes. Example of the log file content: